As my friends from back home are donning pashmina shawls against a cold Autumn racing, I am sipping on a fresh and cold yogurt drink, which is not really lassi and not really yogurt but somewhere in the middle.

After an adventurous walk through the labyrinths of Namsam’s mountainous neighborhood, I found myself tucked in a little corner of Seoul, which is still very green and very sunny and very hot. Around me are five artists – some penning down their thoughts, others painting their feelings, and another making art of his phone camera. As the winds of Seoul caress my puffed-up cheeks, I am taken back to the memories of last weekend…

“So, what do you want to do to this Saturday?” asked Kirsty, eyes twinkling with the tales of her Scottish land.

“Maybe we should go to the War Memorial in Seoul. I have heard tales of their Comfort Women – it’s a window into the past,”

The next morning, three wonderful friends and I made our way to the War Memorial: a place we had often crossed with not much of a thought.

Our new home told us a story each day of beauty, of wonder, of adventure. All around we saw skyscrapers and fancy hotels, each lined with trees and flowers. In between, we saw small shops each decorated very artistically. Seoul was rolling out a carpet towards our dreams, and we were walking on it… this time towards the War Memorial.

We were happy and feeling poetic, smiling for Kirsty’s camera or Steven’s Vlogs, and for Ivanna who was calmly taking it all in. Our smiles soon changed when we made our way inside the War Memorial, where we felt much of the pain this city and country, which was our new home, experienced just decades ago. It felt as if the museum was a time capsule, and we had been taken into the world of Seoul’s challenging past, built over by the tall buildings, smiling skies and laughing children.

As we walked through these gardens in the Memorial, I stumbled across a bigger-than-life-sculptures – probably 10 feet high. It was women and children and men, young and old. There were soldiers and cavalry, and generals and men holding guns and men holding the hands of their toddlers. I walked along these sculptures, from the end to the front. They were all together on a mission. My heart stopped at the sight of the first one. It was a mother, her hanbok and hair flowing back but her face tired and in agonized. Her hands reaching out towards her family that was marching on, on, on. Her little girl, probably 10 was tugging on her brother’s sleeves, who, despite still being a child, marched on with his old father.

I found my fingers lacing around the crevices of the family’s hands, feeling their facial features and eyes which spoke of horror, hope, and duty. These figures loomed over me, so wherever I turned, I could see them large and clear, twice my size, demanding my attention, begging me to gaze into their eyes and feel their pain.

A single tear rolled down my cheek. So much suffering in the name of war. So many families that had to be split, so many lives that embraced death, and so many brave faces that kissed the earth.

We walked onwards and saw the statues of two brothers, one fighting for North Korea and the other for South Korea, embracing each other one last time before duty or death tore them apart. We saw battleships from the early 2000s, their bodies pierced by gunshots. Even the decks were painted a gruesome red to highlight where the hull gnawed bullets. 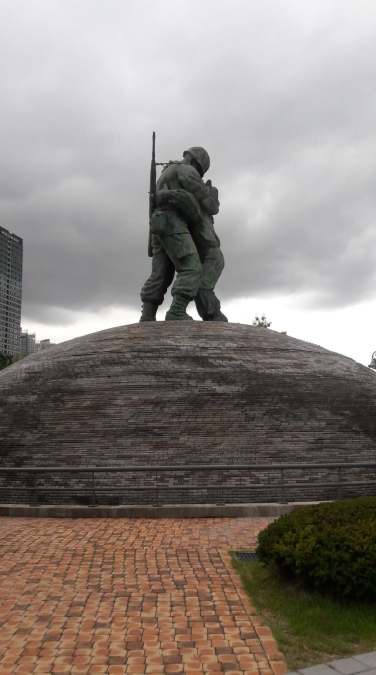 “It is almost unbelievable to imagine everything outside this memorial was built after the catastrophes Koreans had to go through,” Kirsty whispered, the air around her eerily still, “So much blood was shed and lives lost,” I sighed. I wonder when it all happened for the first time when Korea split into two halves.

That is when the Memorial guided me to my answer: an abstract looking tower atop which stood two young girls, arms melting into each other, both holding a clock. “4 o’clock, I wonder what that means,” Ivanna expressed, staring at the time in the clock. We walked around this to find another timepiece – this one was enclosed in a glass box. It too said 4 o’clock and read in gold letters: “The Clock of Hope for Peaceful Unification. Someday, when unification is realized, the Clock will be put on the Clock Tower and will indicate the Time of Unification.”

“That is when the two officially split… the North and the South,” Kirsty breathed. That is when Korea became two wholes of one body. I was awestruck with both sorrow and surprise. 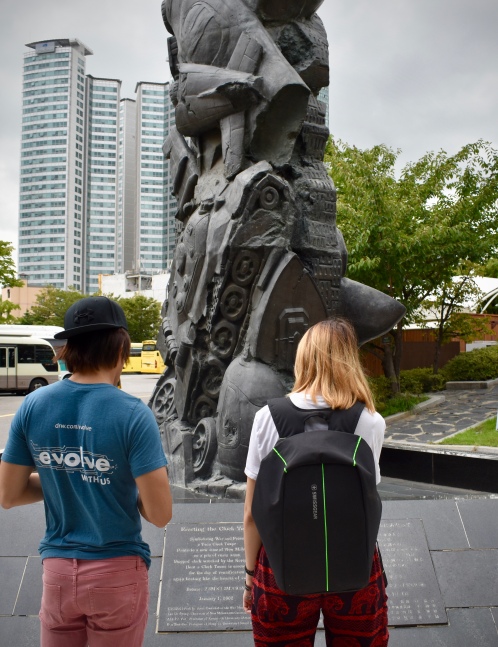 The tower where the two girls sat atop holding a clock

Before living in Korea, I had very little idea of what it would be like. In my first few days, I realized instantly how magical the country is – especially the capital, Seoul. It teems with life, with happiness, with friendly people who thank you and welcome you everywhere. But this reminded me that every path I took had already been trodden over by those who lost their lives in the 1950 Korean war. There were brothers and sisters and family and friends who had to stand against each other, polarized by ideas of how the country should be. It’s surprising how walking through the city, one can’t tell about its heartbreaking past. But it is there, and I see it in the eyes of the revered elders whose eyes still flash with the horrors of war.

Korea may have found its peace and its joy again, and Seoul may by far be the most developed and futuristic city I have been to. Learning of its struggles has beautified this place for me so much more. 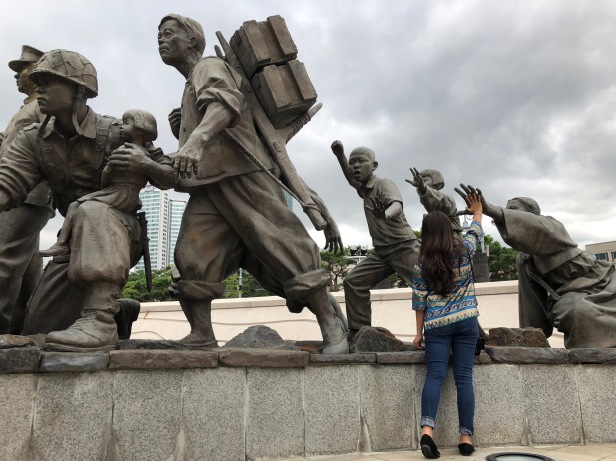 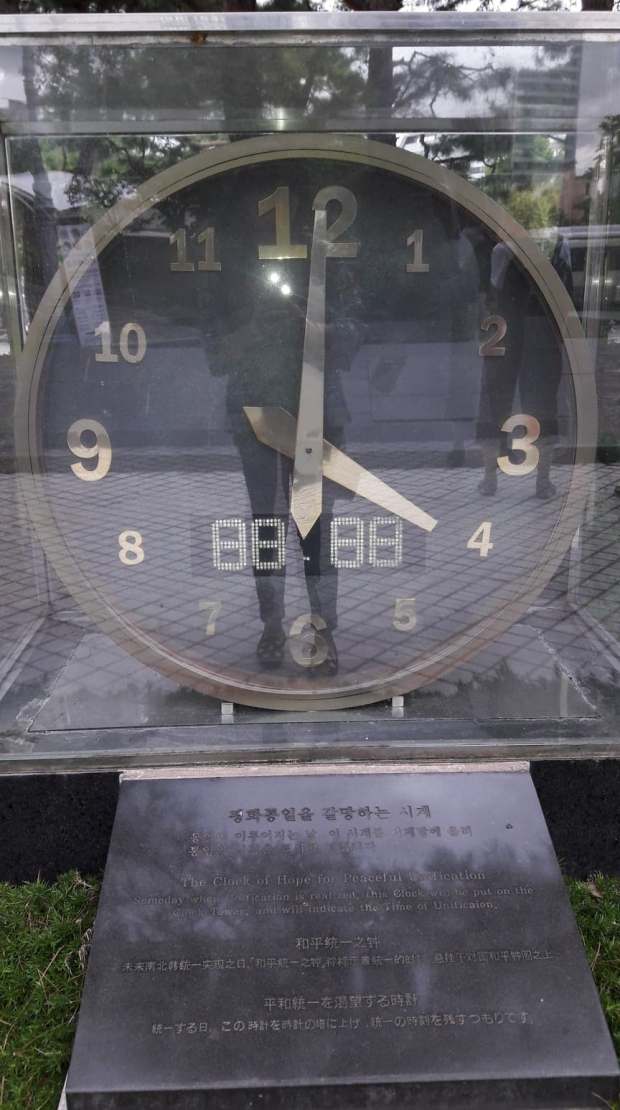 The timepiece which sits frozen

Ezza Naveed, author of "Walking On Wonder", is a young writer and reader with a strong lust for traveling. Walk through her real-life journeys as she shares some of her most sacred and beloved experiences. By combining her love for travel with her spiritual perspective on life, she's here to share an array of fascinating adventures with the rest of the world. Based in Abbottabad, Pakistan. View all posts by WalkingOnWonder

2 thoughts on “The Secret of Seoul: exploring sub-stories”

Ezza Naveed is a young writer and reader with a strong passion for travelling. She is a budding humanitarian and aspires to change the world through the art of storytelling.

Walk through her real life journeys as she shares some of her most sacred experiences. By combining her love for travel with her desire for an egalitarian world, she hopes to share adventures that inspire others to build a more socially inclusive world.

Write to her any time through the her blog!

How many lovely folks do we have so far?